On January 11, 1945 in a snow-covered field near the village of Langlir in war-torn Belgium, Tony Vaccaro aimed his camera towards the body of an American soldier lying face down in the snow.

Just moments after pressing the shutter – and capturing one of the most powerful images of his nine-decade career – he learned the fallen soldier was his friend, Pvt. Henry Irving Tannenbaum, gunned down by Nazi troops.

Eight years and thousands of photographs later, Vaccaro was on the 12th floor balcony of the Look Magazine Building in Midtown Manhattan, for a photoshoot with redheaded Broadway sensation Gwen Verdon. A world away from the horrors of the Second World War, it was there he captured another defining picture of his career.

The striking difference between the two iconic photographs, which are featured in a new exhibition of Vaccaro’s work, is a fitting metaphor for the life and career of the man who saw it all.

Orphaned as a child, he experienced – and documented – the Second World War firsthand as an infantryman, before forging a career as one of the world’s most celebrated fashion and celebrity photographers.

A selection of the work which contrasts his war photography with the glamor of his later career is included in two exhibitions to mark his 100th birthday, which fell on December 20. Vaccaro passed away eight days later on December 28.

Gwen Verdon from a 12th floor balcony of the Look Magazine Building, New York City, 1953. Verdon, a stage icon who won four Tony awards, was one of Vaccaro’s favorite subjects. She ‘did anything and tried anything’. He contrasts her elegance and glamor with the chaos and bustle of Manhattan in this photograph for Look, which he joined after returning to New York City in 1949 following several years documenting Europe’s post-war recovery. The hammock was deployed as an impromptu prop 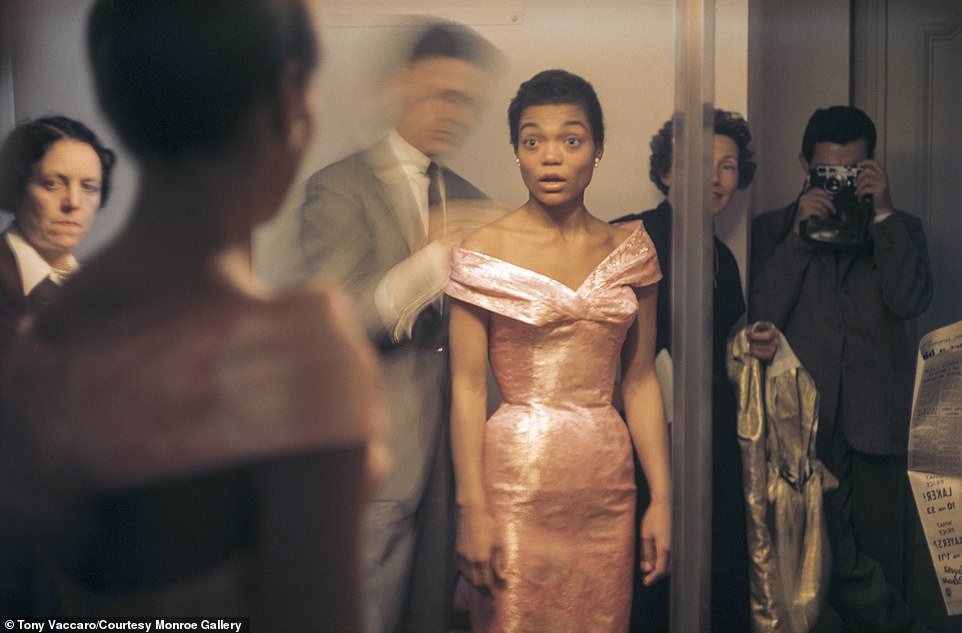 Eartha Kitt and Hubert de Givenchy, Paris, 1961. Vaccaro forged a close relationship with iconic French fashion designer Givenchy while photographing his work for various magazines. In this candid picture, Givenchy makes a last-minute adjustment to singer Eartha Kitt’s dress during a Paris fitting. Vaccaro is visible in the background, with the camera pressed to his face, as he snaps the bustling scene. Givenchy appears in several photos in the Tony Vaccaro Centennial Exhibitions 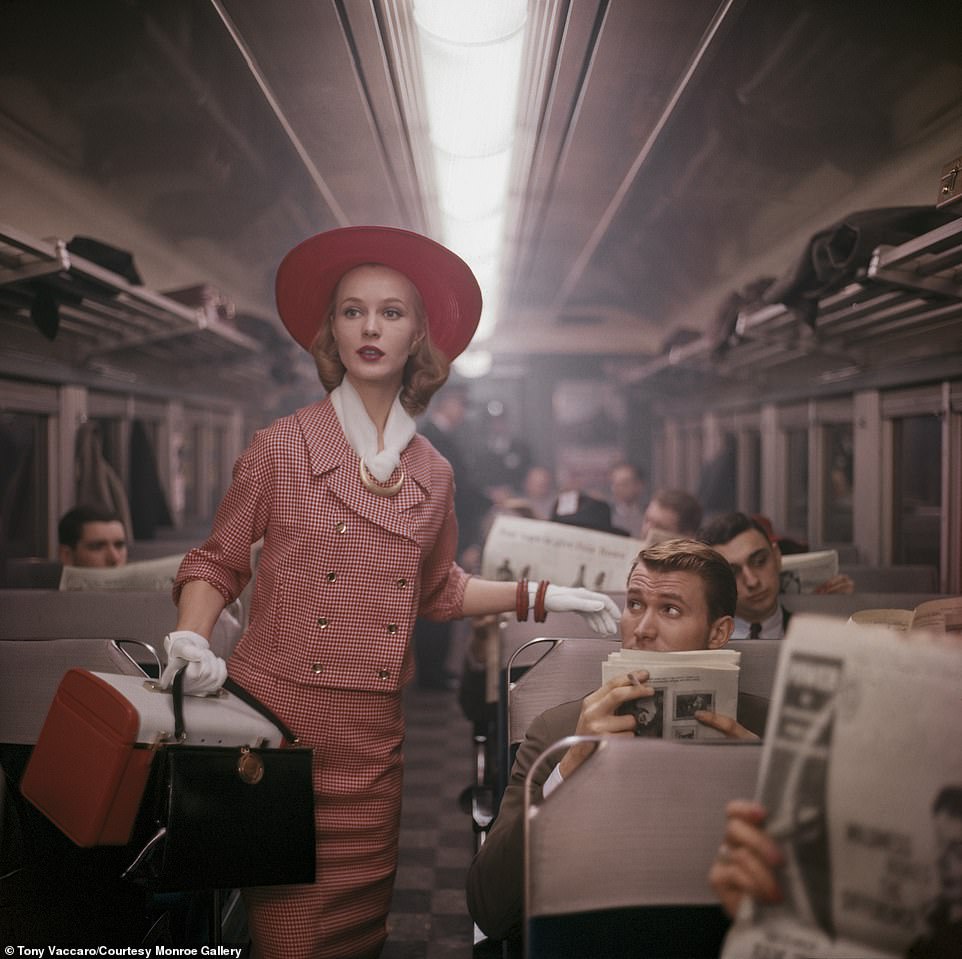 The Fashion Train, NYC, 1960. Only five years after the Second World War ended, Vaccaro was setting himself apart from other fashion photographers with his unique and innovative style. This picture, for Good Housekeeping, shows a model move through a crowded train carriage – catching the eye of young man as she slinks by in her striking outfit. The natural and candid scene is typical of Vaccaro’s style, and a feature of several of the photos from the latest exhibition 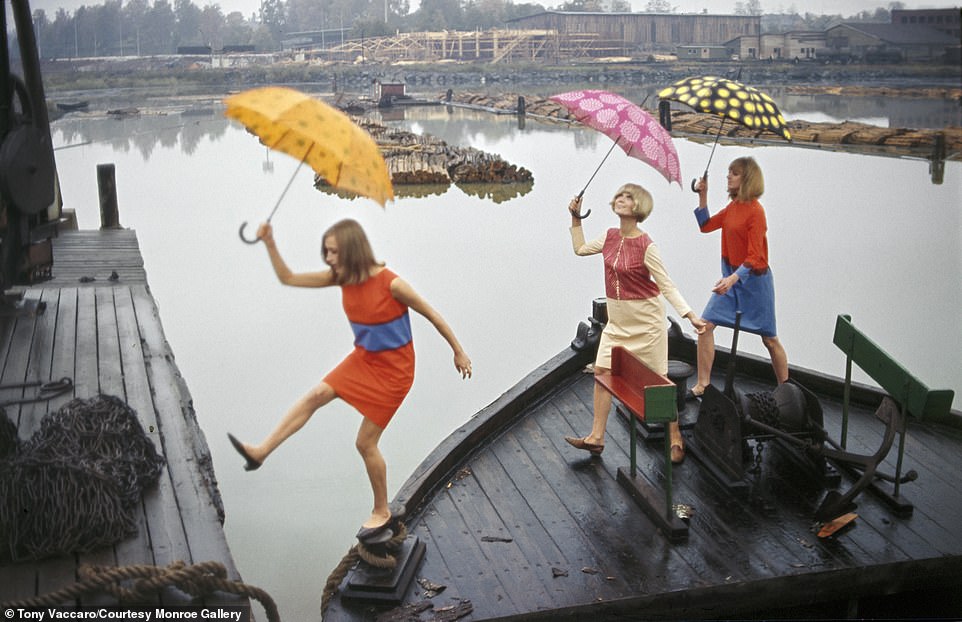 Fun in Finland, 1965. In 1963, Vaccaro married Finnish model Anja Lehto. Lehto is the lady on the left in this photograph, which was taken during a shoot for Marimekko, the Finnish clothing and textiles brand. He met Anja in 1961 at a show hosted by Life magazine in New York City. He previously recalled: ‘At that time they presented the girls. Girl number one came in, did her walk, girl number two, girl number three . . . Girl number four — I looked at her and said: ‘That’s my wife’. The couple had two children together and separated in 1997. Anja passed away in 2013 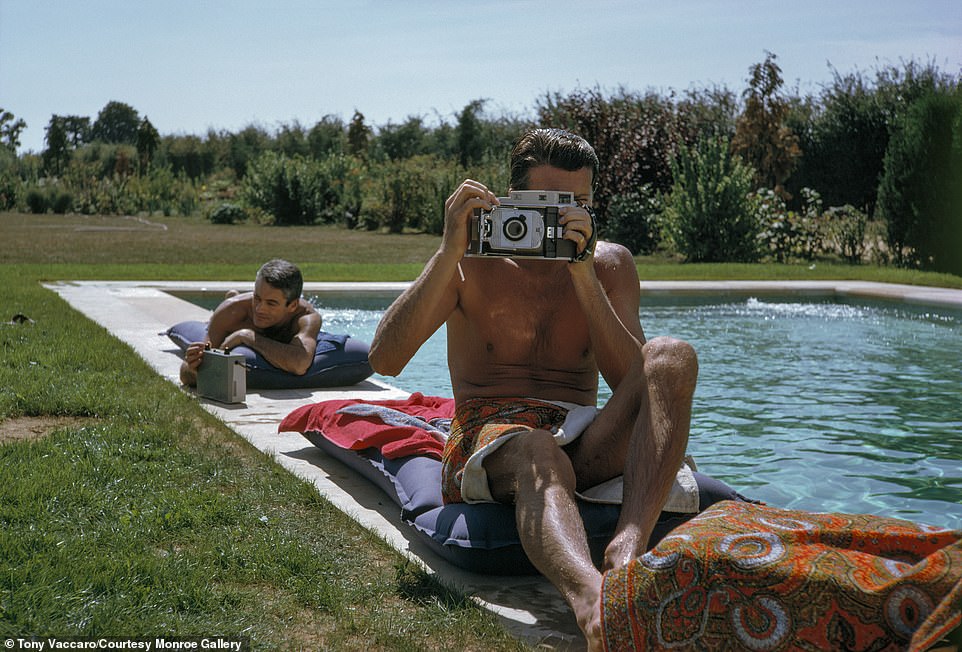 Givenchy by the Pool, South of Paris, France, 1961. Vaccaro’s friendship with Givenchy, whose clients included Audrey Hepburn and Jacqueline Kennedy, is immortalized in this intimate poolside photo. Vaccaro was teaching Givenchy how to use a camera – and seized the opportunity to capture the moment himself. In the background, Givenchy’s long-time partner, Philippe Venet, adjusts a wireless radio 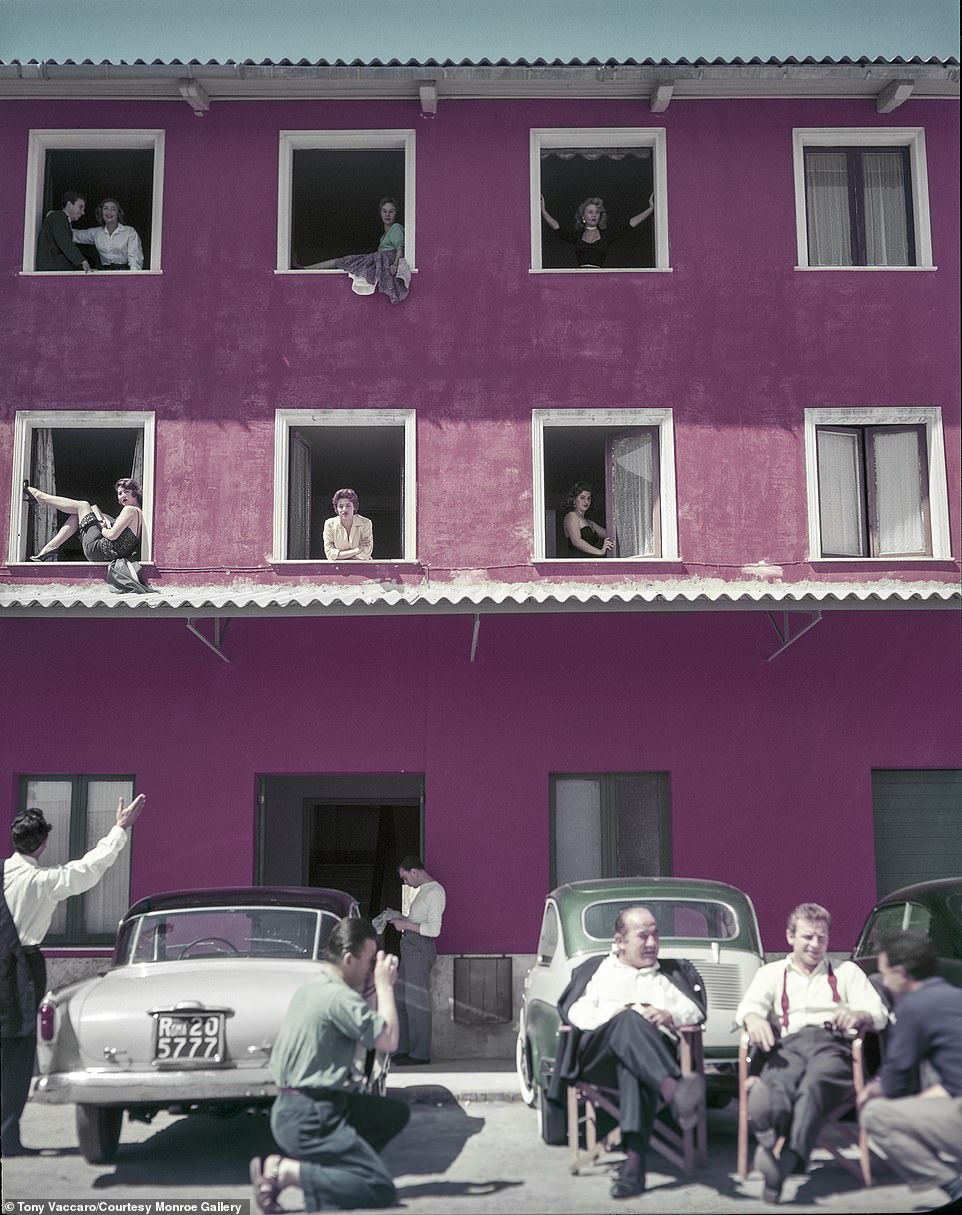 Extra on the set of ‘8 ½’, Lazio, Italy, 1962. The exhibitions include several photographs taken by Vaccaro on film sets. Here, the combination of characters, cars and colors creates the impression of several ‘scenes within a scene’. The film, 8 ½, was released in 1963 and won the Academy Awards for Best Foreign Language Film and Best Costume Design 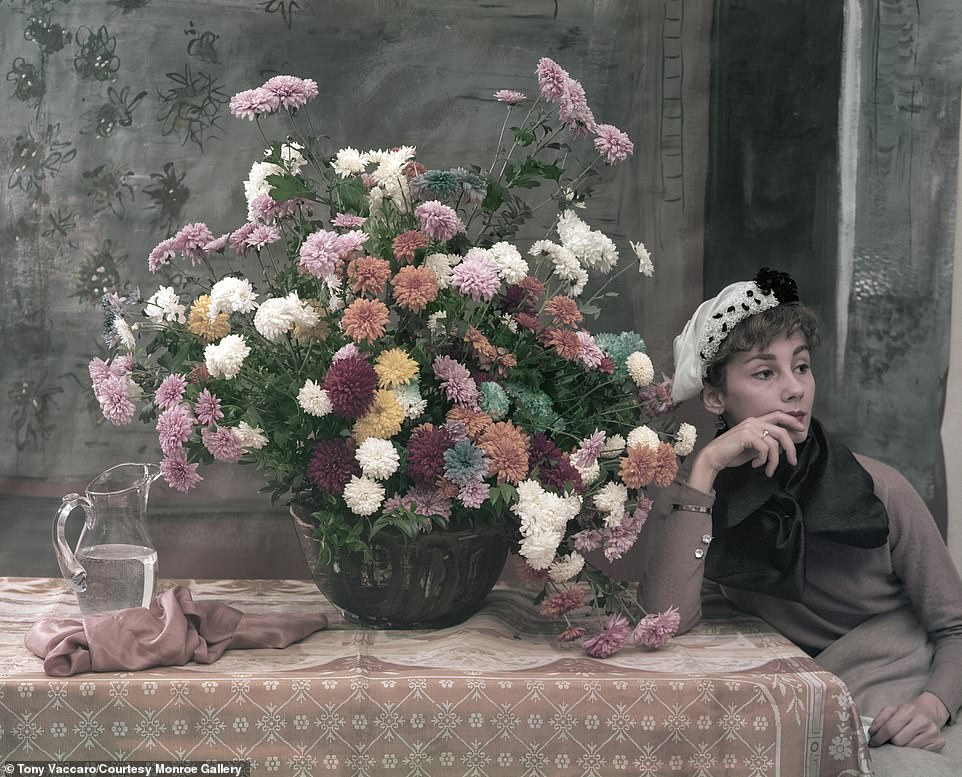 After Degas: Woman and Flowers, NYC 1960. Vaccaro took this photograph for Look magazine, which commissioned him to recreate a series of masterpieces. The image recreates A Woman Seated beside a Vase of Flowers, the 1865 painting by Edgar Degas, the French impressionist 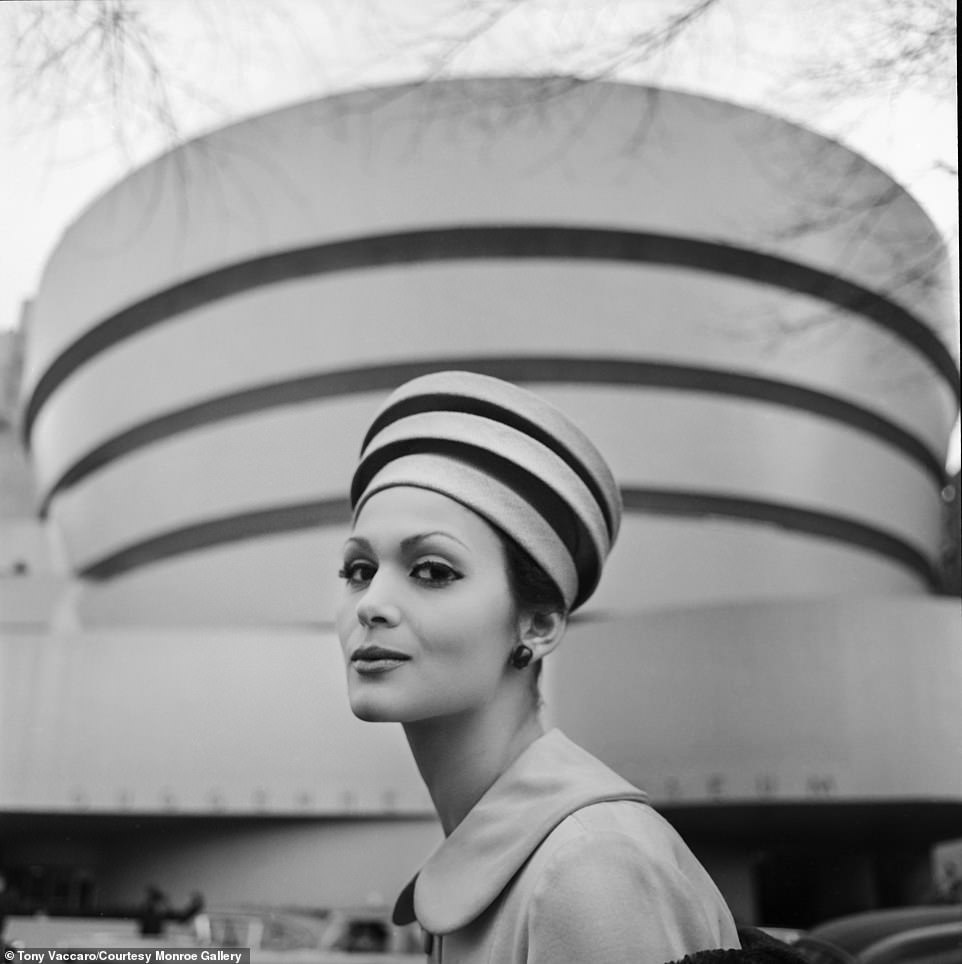 Guggenheim Hat, New York, 1960. In another shoot for Look, Vaccaro was sent this striking sculptural hat – and knew immediately that he would pose the model in front of his favorite museum, the Guggenheim. He recalled: ‘I was assigned by Look magazine in 1960 to photograph model and actress Isabella Albonico and the hat. Once she placed the hat on her, I immediately said ‘we are going to the Guggenheim’. He said Albonico had ‘the longest neck of any model that I ever worked’ 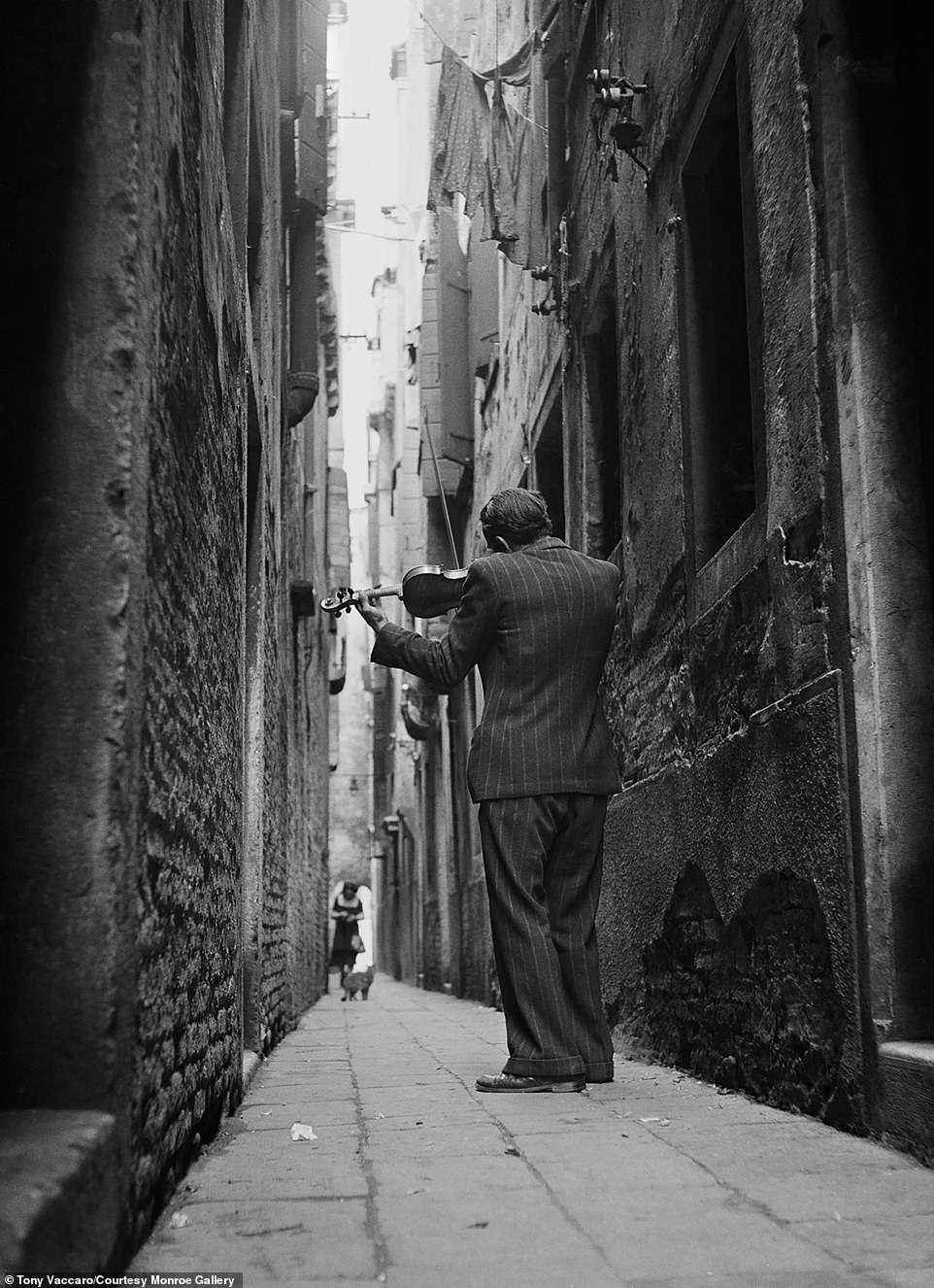 The Violinist, Venice, Italy, 1947. Vaccaro was discharged from the US military in September 1945. After his personal role in photographing the deadliest war in history, Vaccaro held several jobs documenting Europe’s recovery, including a stint at Weekend, a supplement of the U.S. Army newspaper Stars and Stripes. This photograph, captured in the narrow pathways of Venice, was taken during his transition from a war photographer to a documentarian of popular culture 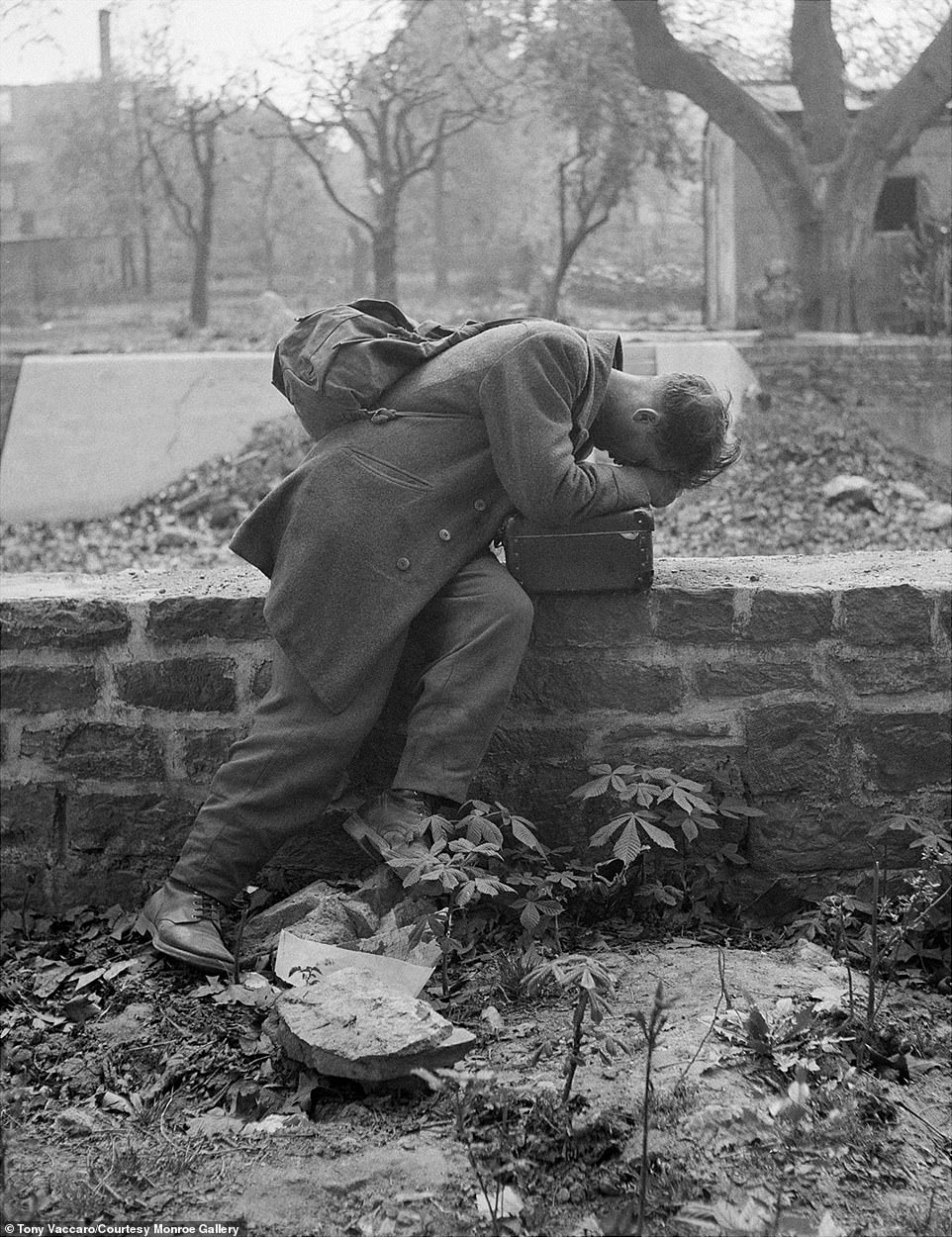 Defeated Soldier, Frankfurt, Germany, 1947. The Defeated Soldier, a German troop crying by the ruins of his home in Frankfurt, is one of Vaccaro’s most recognizable war photographs. Taken during his work for Stars and Stripes, Vaccaro has recalled how he happened upon the soldier shortly after leaving the US embassy in Frankfurt. His interactions with the enemy led Vaccaro to realize ‘we all bleed the same blood’. The photo symbolizes perfectly his view that ‘we were not much different’ 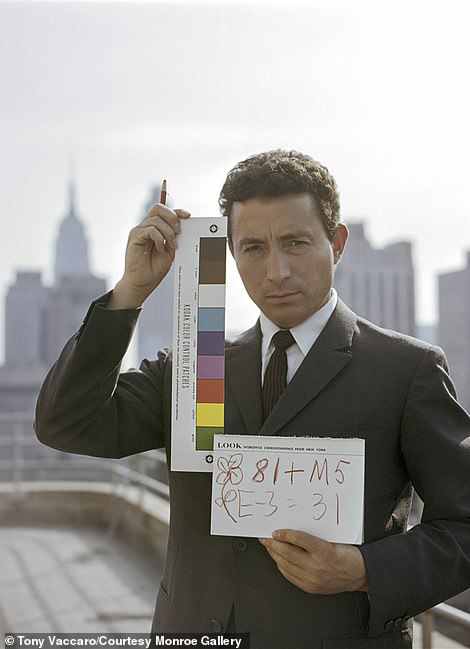 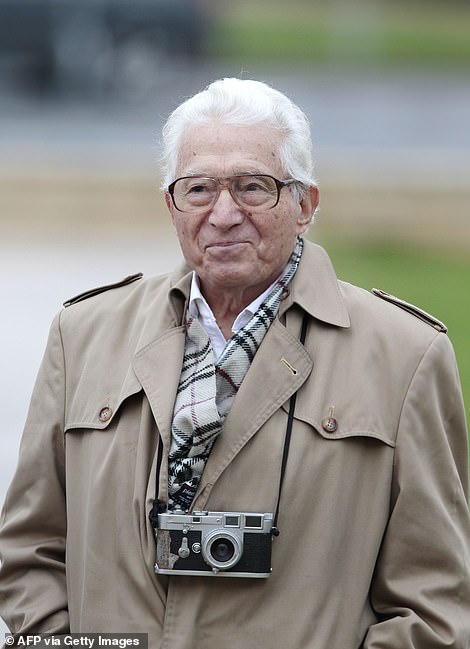 Tony Vaccaro with the test strip, New York, 1968 (left). For a man whose life was defined by his endeavors behind the camera, we are given a rare glimpse of Vaccaro as the subject in this never-before-exhibited image. Sharply dressed in a dark suit and holding onto a Kodak color control chart, Vaccaro appears to be preparing for a photoshoot on this New York City rooftop. Right, he is pictured aged 90 at the Memorial of Caen in north western France. As a soldier, he landed on June 1944 on the Normandy coast with the 83rd Infantry Division 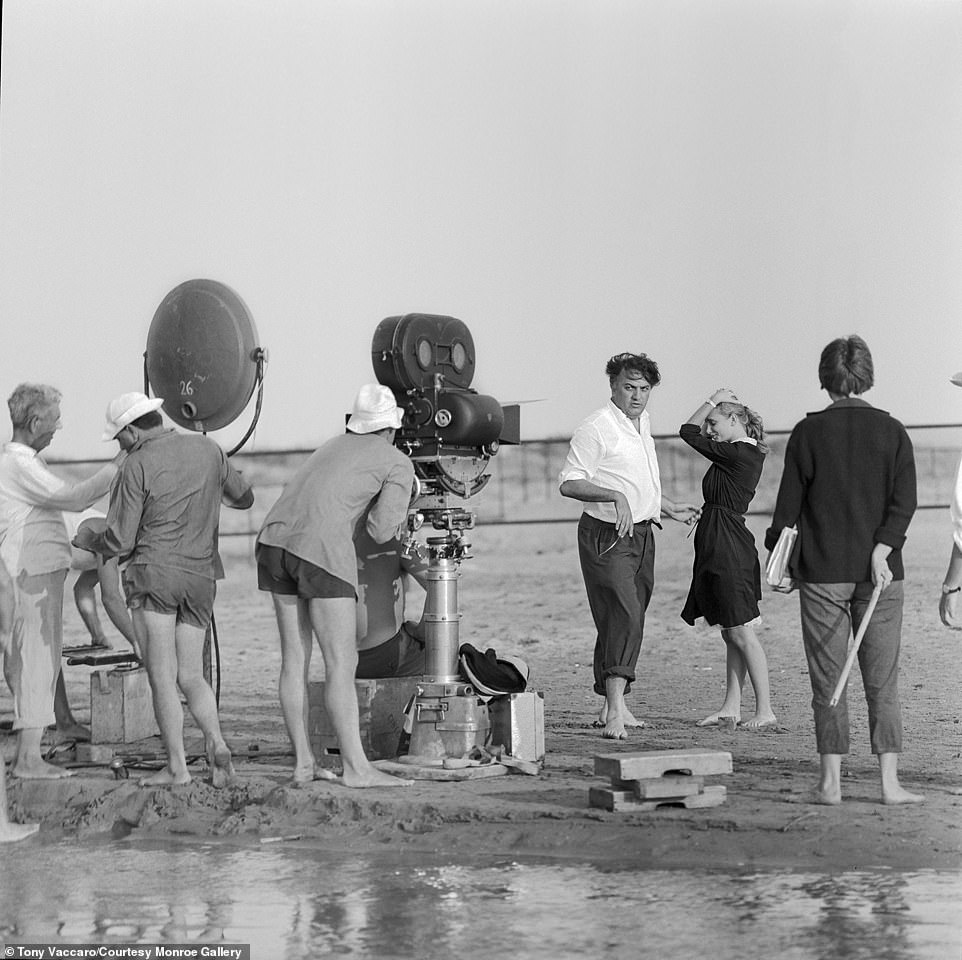 Fellini on the set of ‘La Dolce Vita’, Italy, 1969. Vaccaro’s ability to capture a moment and ‘remove anything artificial’, as he himself puts it, is illustrated brilliantly in this picture of the influential Italian director Federico Fellini. Fellini also directed ‘8 ½’ 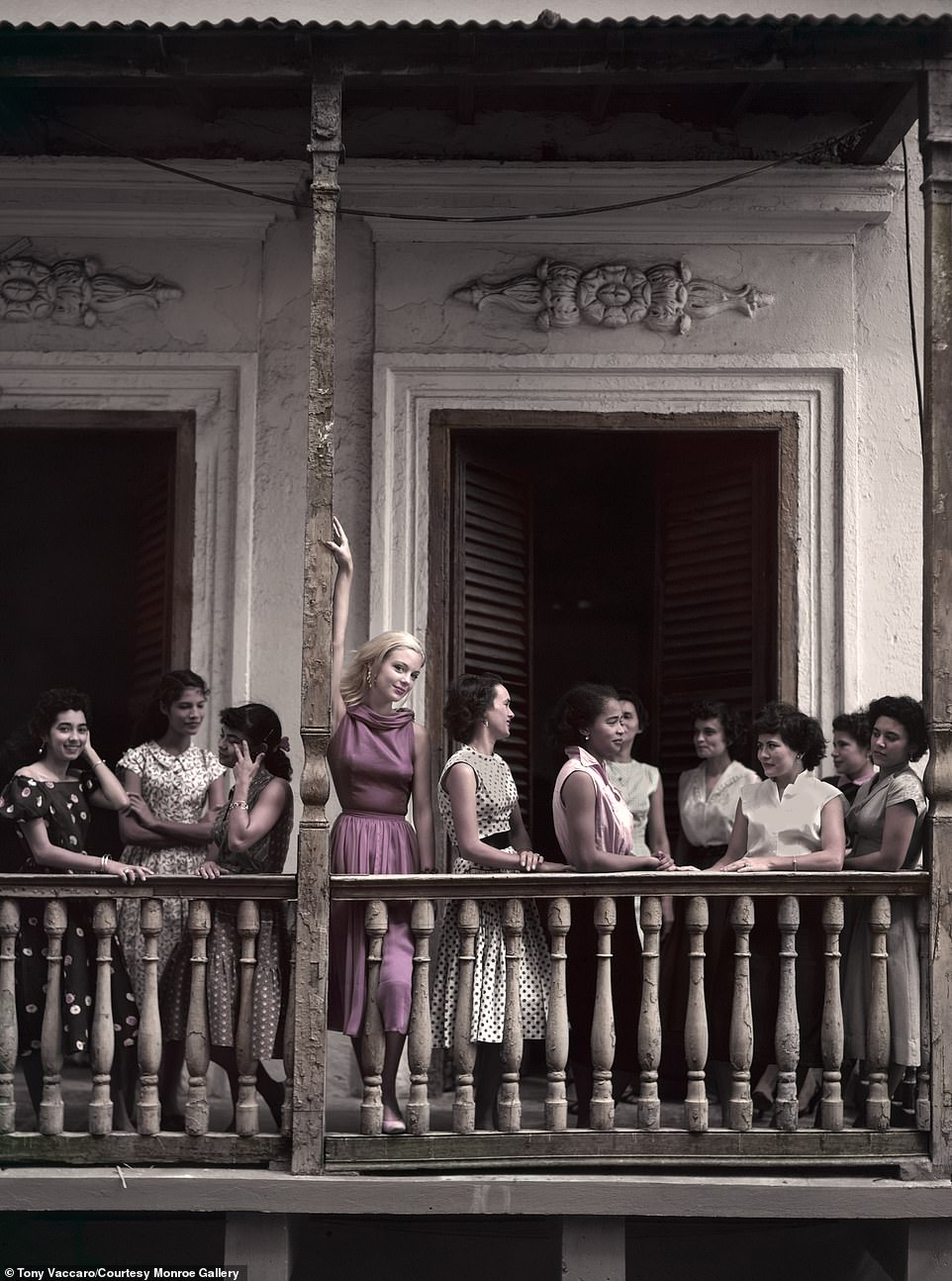 The Pink Balcony, Puerto Rico, 1951. The diversity of Vaccaro’s work is captured brilliantly in this photograph, which is being exhibited for the first time. Only a couple of years prior, he was photographing post-war Europe as it came to terms with the horrors of World War Two. In this vibrant frame from 1951, a glamorous model in a pink dress takes center stage as a row of carefree women exchange smiles around her 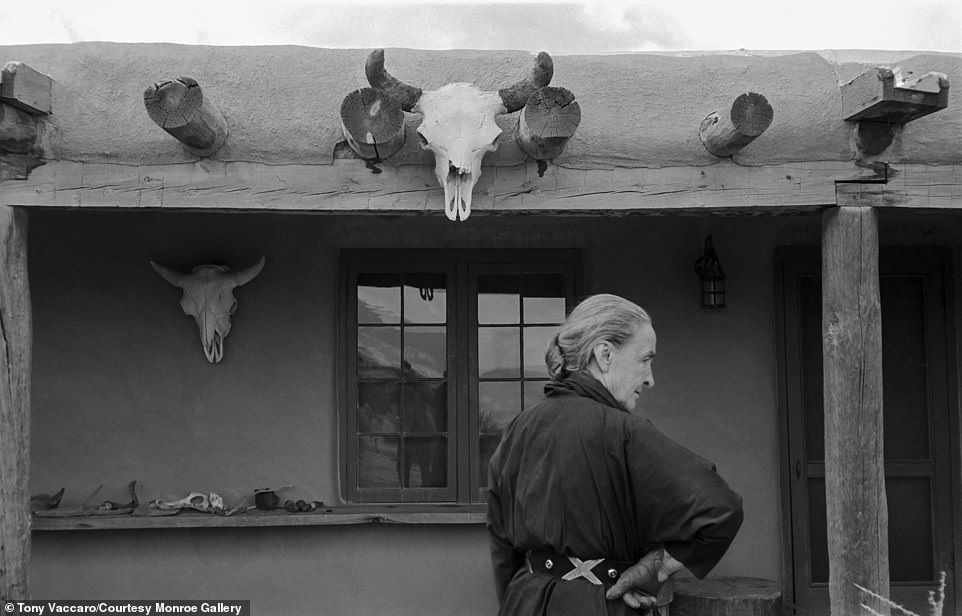 Georgia O’Keefe and skull, Abiquiu in 1960. Artist Georgia O’Keefe, the ‘Mother of American modernism’, was 72 years old when Vaccaro was commissioned to photograph her for Look magazine at her home in New Mexico. As he recalls, the job started badly. O’Keefe ‘was expecting a different photographer’ – and wouldn’t even look at Vaccaro. Five days into the job, and with barely a word exchanged between them, O’Keefe mentioned the legendary Spanish bullfighter Manolete. Vaccaro ‘told her that I had photographed Manolete’ and they forged a connection. Vaccaro spent nearly two weeks with O’Keefe 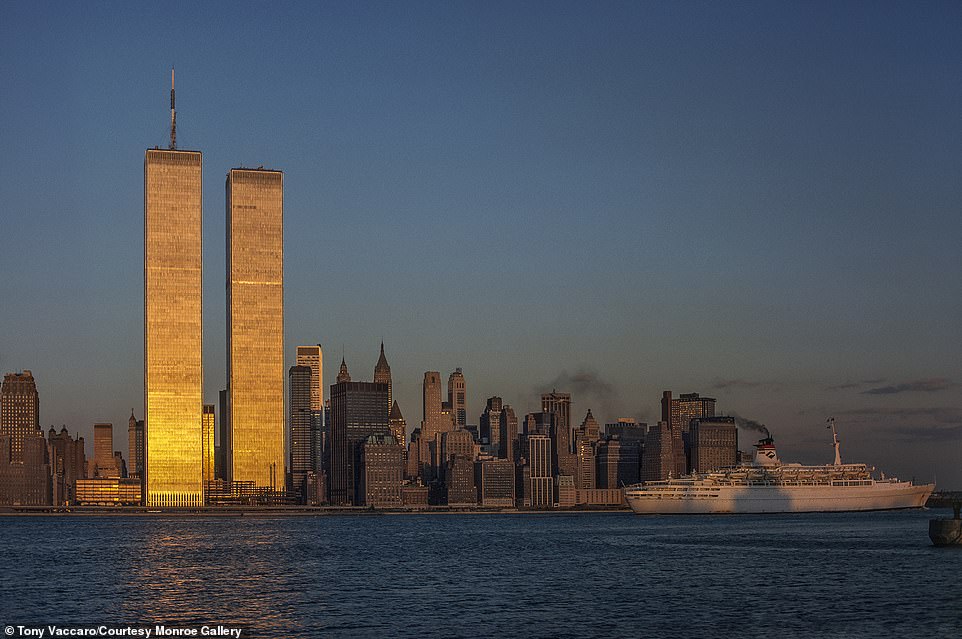 Twin Towers, 1979. Vaccaro’s work is rarely without at least one individual. This poignant photograph of the Twin Towers is a striking exception. The buildings are illuminated by the soft glow of a sunset in 1979 as an ocean liner passes along the Hudson River 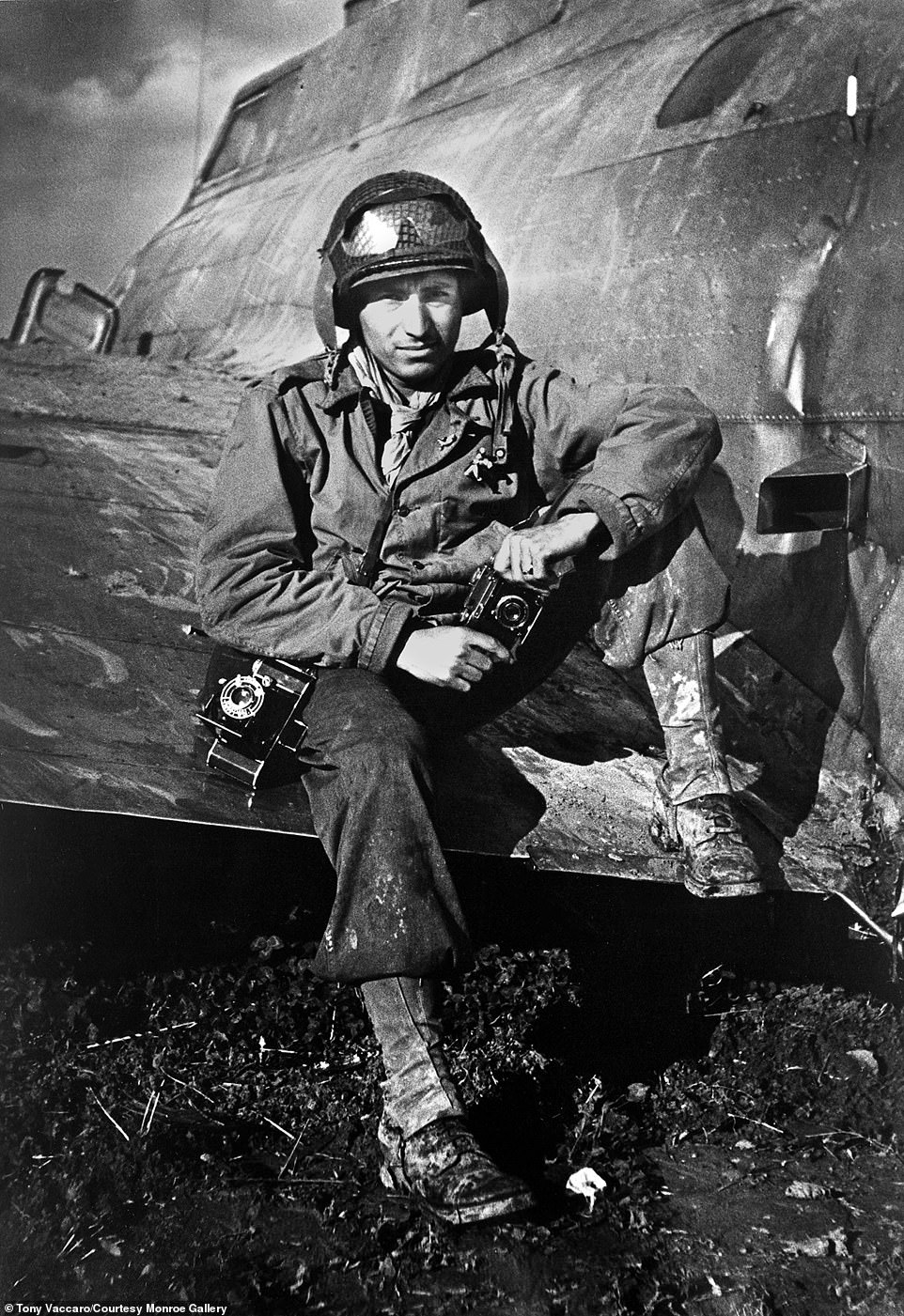 Tony Vaccaro on the wing of a plane, 1945. Vaccaro was drafted into the US Army shortly after he graduated High School in 1943. He wanted to become a photographer in the Signal Corps but was turned down due to his young age. Undeterred by the rejection, Vaccaro took his camera with him to Europe anyway. A private with the 83rd Infantry Division, he saw combat at the D-Day Normandy landings and the Battle of the Bulge. Vaccaro took around 8,000 photographs during the war. He would develop them in the dead of night in helmets borrowed from his fellow soldiers 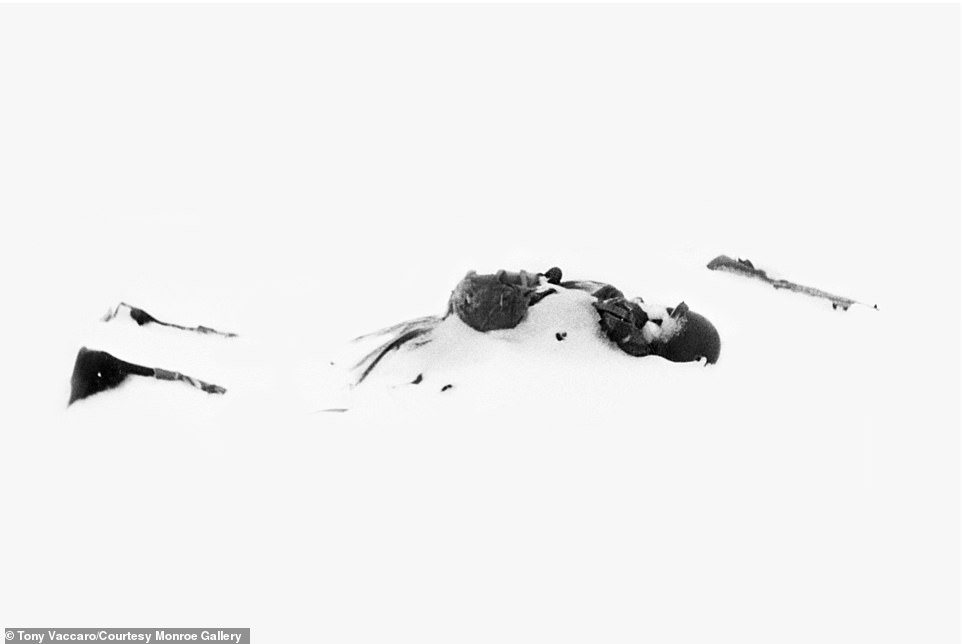 White Death, Pvt. Henry Irving Tannenbaum Ottre, Belgium, 1945. Vaccaro encountered the body of an American soldier face down in the snow close to Langlir, Belgium. His  mentality as a photographer of war was that ‘the world had to see it’. ‘I had to show this hell to the rest of the world,’ he explained. With that approach, he photographed the body, partially buried in the snow. Moments later, he learned the soldier was his friend, Pvt. Henry Irving Tannenbaum. Five decades later, Tannenbaum’s son contacted Vaccaro to ask about his father and they returned together to the field where Henry was killed 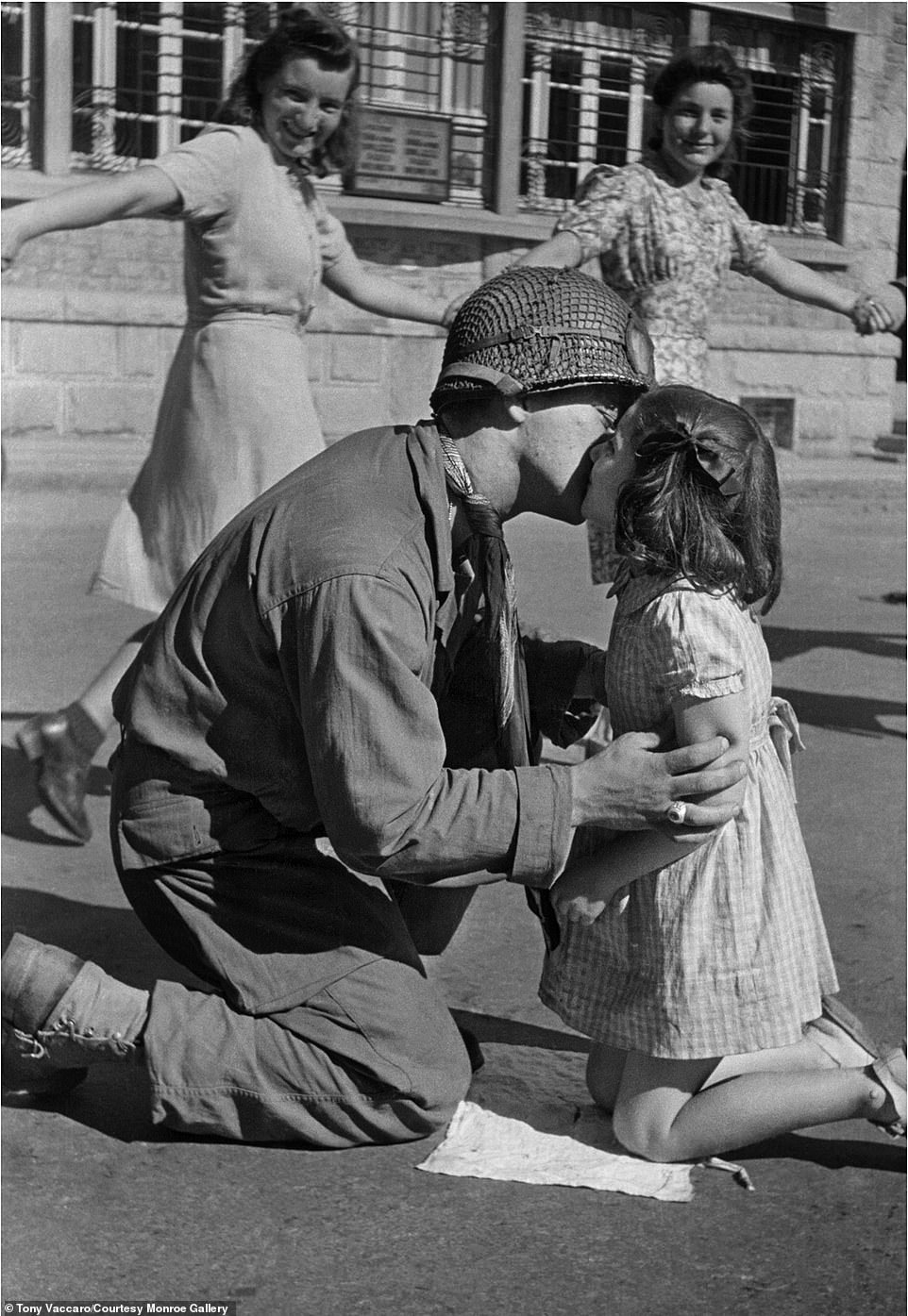 Kiss of Liberation, St. Briac, France, August 15, 1944. Arguably Vaccaro’s most recognizable photograph, the Kiss of Liberation captures a moment of joy amid war. The photograph was taken during the liberation of Saint-Briac, in the Brittany region, as the Allied Powers fought to expel Nazi forces from France. Vaccaro describes the photo as ‘almost an accident’. He was only able to capture the moment because the French kiss three times on the cheek, instead of once. The soldier is Sergeant Gene Constanzo. The young girl’s identity remains unknown. The photo was selected by General Eisenhower as a symbol of American action in Europe during World War II. Five million copies were printed and distributed around the world 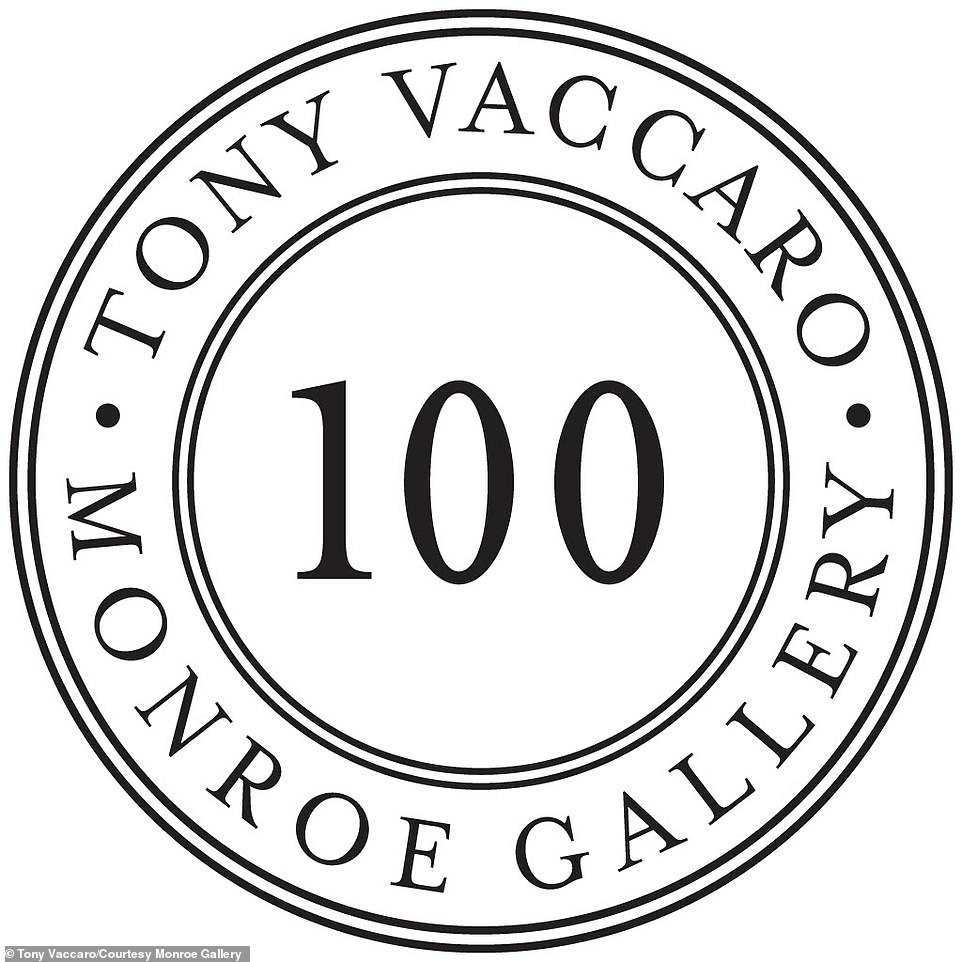 The Tony Vaccaro Centennial Exhibitions, held by the Monroe Galleries of Photography in New York and Santa Fe, ‘juxtapose the living legend’s powerful war images with the lyrical mid-century fashion, film, and pop culture photographs that came later’. A pop-up show in New York City presented by Monroe Gallery of Photography was on view at 21 Spring Street from December 13 through 18, 2022. A second show is being held at Monroe Gallery in Santa Fe from November 25, 2022, through January 15, 2023.